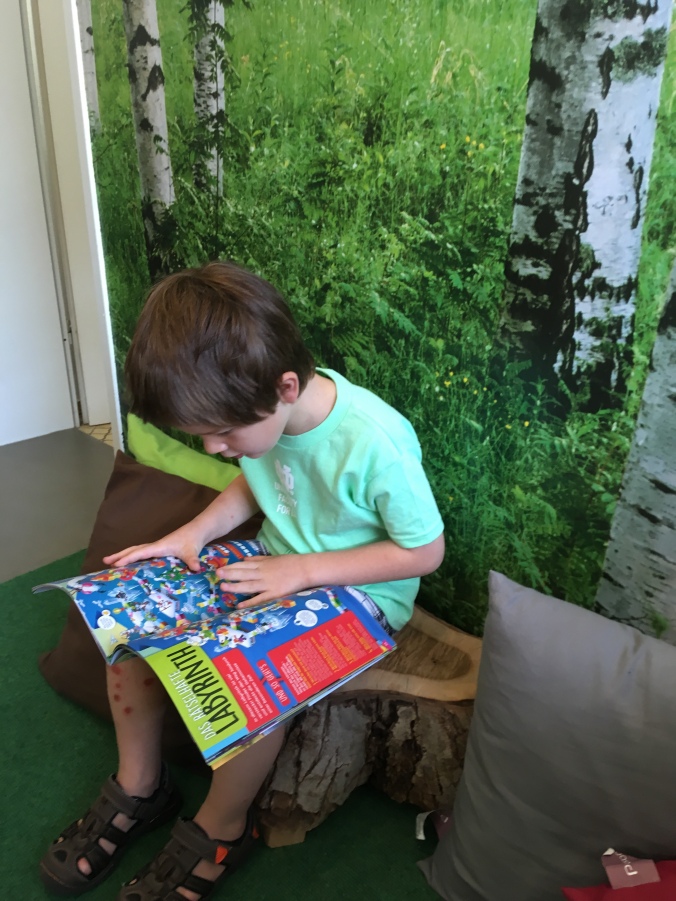 Chris and I have learned from any travel involving jetlag to anticipate “third day syndrome”. On day 1, you are literally on the plane or just arriving. Day 2 is still exciting and adrenaline-fueled and you don’t quite feel the effect of weird sleeping or you were so tired that you just pass out when you decide to sleep, so jetlag doesn’t really catch up with you. Day three though…day three. It’s the “were we idiots for doing this?” day. It’s the “I’ve ruined my children” day. It’s the “I’ll never sleep again and I want to go home” day. Day three of our last Eurotrip enlightened us to this phenomenon, so we thought we were ready this time.

Christopher had told us a week or two ago that he had gotten a cut on his foot at my father-in-law’s house in Connecticut about 10 days prior. It looked ok even though cuts on the bottom of feet worry me generally and after cleaning it with hydrogen peroxide, I assigned some low-level anxiety to it and eventually stopped worrying about it since nothing seemed to be getting worse. He got some mosquito bites on a nature walk, which usually turn into huge welts, so I didn’t really worry about his leg looking a little wonky, since his arm also had huge welts on it. His leg was starting to look a little gross, but again, I chalked it up to scratching mosquito bites and moved on.

On day three, however, I noticed that it seemed to be spreading and spent all day in an exhausted, anxiety-fueled Google frenzy. Half the day I was convinced he had scabies like a Victorian British orphan and then I convinced myself he was dying of sepsis and had to go to the hospital immediately. Day three was also Chris’ first day of class and my mom still did not have her bag. It was a mess.

Chris got home and went to ask our AirBnB host about seeing a doctor. He told us that he worked at the hospital and was some assistant of some kind, so he took a look and after we assured him it wasn’t measles, he said he would drive Chris and Christopher to the hospital. We had already put Christopher in his PJs and tucked him in, so Chris roused him and they drove to Emmendingen Kreiskrankenhaus (why is the German word for hospital so funny??). He saw a great doctor who spoke good English who told us he thought it was a staph or strep infection and to come back to his practice in the morning to get a prescription for antibiotics. 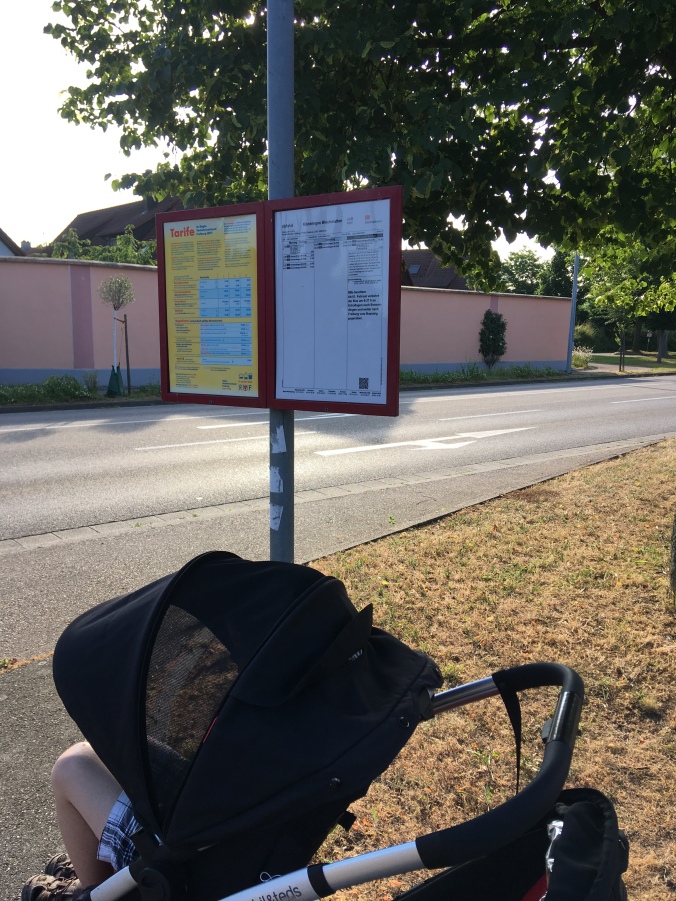 Waiting for the bus to the doctor

This made me feel a lot better, though I still swung wildly between feeling ok and being convinced it it’s actually MRSA and we would have to amputate his leg. I slept a bit and then took the bus with Christopher to the Gemeinschaftspraxis in Emmendingen to see this doctor’s partner. (Sidenote: Chris and Christopher like to build “mine shafts” out of Duplos that Chris jokingly calls “Gemeinschafts” or the “Gemeinschaft Community Prison” since it means “community”, so Christopher thought it was funny that was the name of the doctor’s office.)

The secretaries spoke serviceable-enough English and the doctor from the hospital had told them to expect us, though we were all a little deer-in-the-headlights about the whole scenario. The office had a cute little play area for kids in the waiting room, which Christopher loved. I also noticed that the doctor we were seeing this morning had Homöopathie next to her name in addition to the word for general practitioner and that there was a whole wall of natural remedies. It briefly concerned me, especially because we were dealing with something that clearly needed antibiotics, which are often demonized in the alternative medicine community in America, but it quickly became apparent that perhaps they do not have the cultural divisiveness between conventional and alternative medicine here or it may have simply been a quirk of the particular practice.

Anyway, the visit went fine. She spoke OK English (Christopher clearly had a hard time understanding her) and we had a few misunderstandings, but she prescribed an antibiotic and gave me a slip of paper to take to the Apotheke (Pharmacy) in town. Since our insurance only covers doctors licensed in Indiana (I didn’t ask if these doctors were, perchance, licensed in our beloved American flyover state), we were cash patients (or Privatpatient). I had to run to the ATM to get cash, but it was fairly affordable – about 90 euros for the visit and diagnosis (Impetigo: a common highly contagious strep or staph infection of the skin).

The Apotheke is like a drug store/pharmacy. You can’t even grab Ibuprofen from the shelves, but have to ask for the attendant to get it for you in line. I wonder if this helps cut down on overmedicating or has anything to do with more acceptance of herbal remedies, but writing any more about it would be pure speculation on my part. They were very helpful and again spoke good enough English to get me set up with the antibiotics. Christopher and I made our way to the bus stop at the platz and browsed the market while we waited. I got some apple tarts to bring home and the bus was uneventful except for my stroller falling over and making a nuisance of itself. But again, I’ve found everyone very friendly and an older lady was clearly teasing me about it in German with a twinkle in her eye, even if I could only pick out two words from the whole thing. 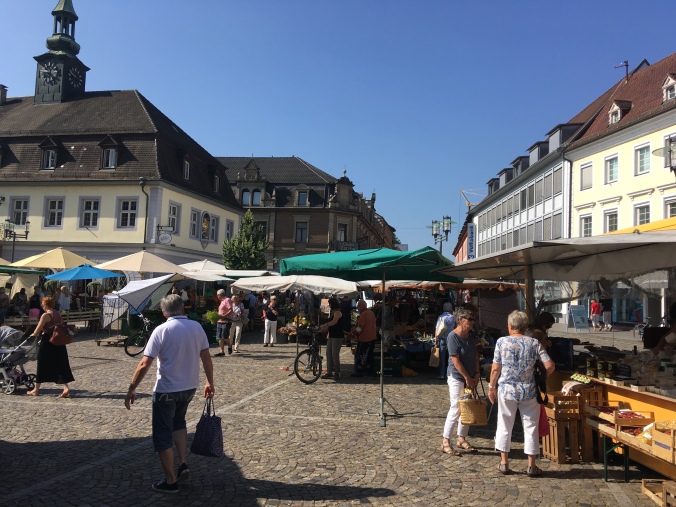 I got briefly lost on the walk home from the bus to our AirBnB (no Google Maps since our phones don’t get data internationally…yeet) and arrived to find my mom cleaning up from Therese barfing up her breakfast. It was low key mayhem the rest of the day. Christopher was out of sorts from being so tired – the visit to the doctor was stressful for me, it must have been for him. Therese barfed one more time from what turned out to probably just be exhaustion since she hadn’t fallen asleep until 1:30am the night before. (“What are you doing with Brother???” she yelled when Chris took him to the hospital, breaking my heart.) I realized I had forgotten to ask the doctor some things and started spiraling again in to a Scylla and Carybdis of exhaustion and anxiety.

Chris decided he was going to take advantage of his own German health insurance provided by his state scholarship to go back to the Gemeinschaftspraxis and see the doctor he had seen last night about his own spot of Impetigo that had shown up that day, along with some on Therese. His visit put me at ease, though, and Christopher was clearly acting like his own (exhausted) self and it didn’t seem to be getting worse.

We ate dinner, I put Teddy down, took a shower and passed out on our bed at 6:45 until Teddy woke up for a jetlag party at 9:30 and Therese began her nightly jetlag whine/yell. Again, I didn’t fall asleep until around 1:00, both because of the little Ts being awake and because I was just wired from anxiety, jetlag, and sleeplessness. I had a moment lying in the dark when I just implored all of our family’s patron saints for help. My anxiety was telling me I needed to stay awake all night to keep vigil for Christopher, even though reason would indicate that actually sleeping would help him more. I realized that I couldn’t keep vigil all night, but the saints could. I was praying especially to St. Therese to help me get Therese to sleep. We were both so exhausted and unhappy and I had just been snappy to her. I didn’t have the energy to deal any more and Chris had to sleep to get to class in the morning. As I was praying, I had a sweet experience of the love of the saints that I think I will keep to myself, but it helped me profoundly to know that I was not the only one keeping vigil that night.

I finally fell asleep, only for Teddy to wake up too early. I put him back in his crib and passed out on the couch again. I woke up at 9:00am feeling infinitely more positive about the world. The kids and I ate breakfast and did Morning Time. My mom got back from the grocery store and we were talking about our plans for a train day trip in the region.

Then Christopher threw up his breakfast. Sigh.

It was just an upset stomach from the antibiotics, but we decided my mom would go on the train trip since she had already bought a ticket and even though Christopher was feeling totally fine, we wouldn’t risk vomiting on the train and I took the kids to a playground in the neighborhood. 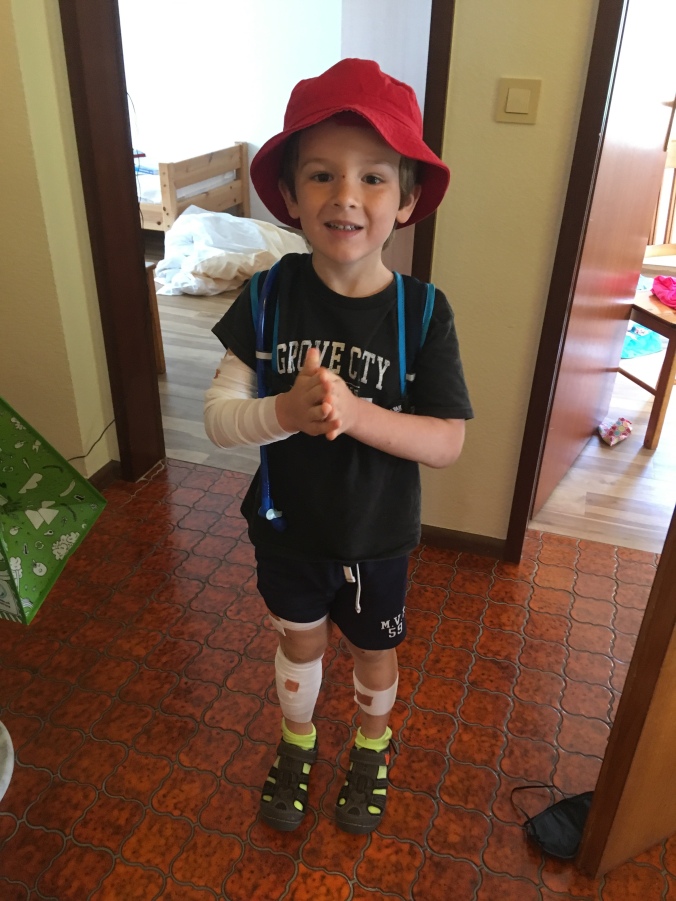 “Mommy, they used these bandages for lepers in olden times.” 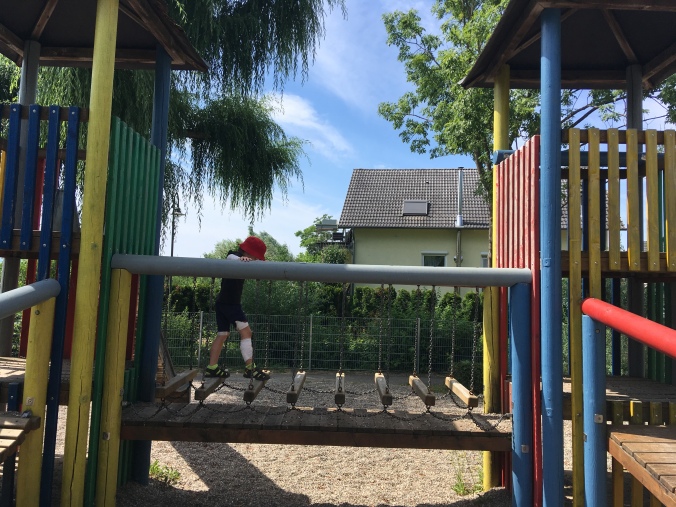 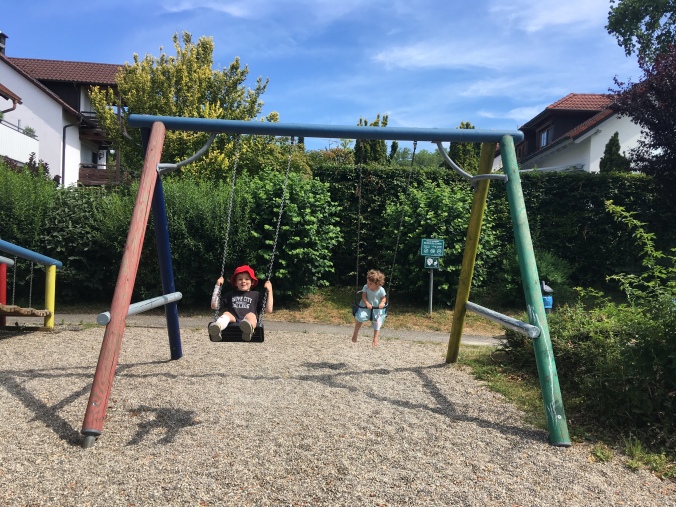 Since Chris gets home around 3:00 from his class and everyone seemed to be almost back to normal, he took them into Freiburg to get them bächlebooten, toy boats for the little canals running through the city, while I stayed back with Teddy, nursed my own cold, and cleaned the apartment.

Things are definitely looking up. Christopher’s skin is healing and we are beginning to get decent nights’ sleeps. Here’s to the next five weeks being less eventful. 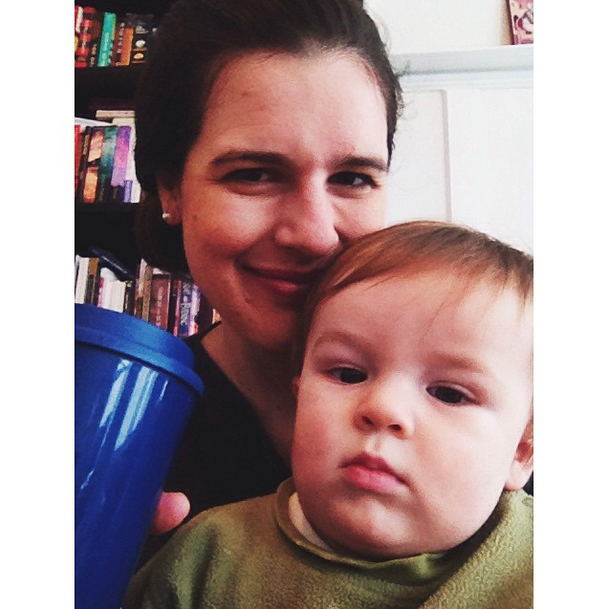 I got to celebrate my 30th birthday in both my birthplace and where I started my twenties. I met Chris at Georgetown when I was 20 when our group of friends attended a performance of Handel’s Messiah at the Kennedy Center and today we got caught in a rainstorm on a walk at Theodore Roosevelt Island. I couldn’t imagine a more fulfilling way to spend my twenties than the adventure of showing the world to my kids with the husband of my youth. Here’s to my thirties. May God teach me to number my days that I may gain a heart of wisdom. (P.S. Three before thirty is great, but Baby Mooney #4 due May 22 should start the next decade off swimmingly!)