Gather ’round as I tell the tale of a seaworthy (with the assistance of a floatie) young lad and his quest to conquer the dastardly giant squid. I would have written a sea shanty but the open ocean frightens me.

We like to go to the Peabody Museum of Natural History in New Haven, because it’s a mile away and free for all us Yale ID possessors. Christopher loves to sprint through the discovery room exclaiming about the ants and horseshoe crabs and then sprint through the dinosaur hall and then cautiously creep around the stuffed mammal exhibit. Aside from the occasional lapse in exuberance in the face of the giant stuffed Kodiak bear, you get it, it’s a lot of sprinting.

The last time we went, though, we were minding our own business, after manipulating the empty jogging stroller in the elevator and agreeing we’re not going to touch the Alarm button (again), and made it down to the first floor to continue our sprint to the dinosaur exhibit. Christopher got a head start but instead of the usual 100m dash around the corner, his shoulders went to his ears and he gritted his teeth as he entered the main hall before he turned around desperately asking me to “carry you” (pronouns are hard). I laughed a little, wondering what was wrong, but I picked him up with my non-stroller hand and followed his eyes to the enormous model of the giant squid hanging above the ticket counter.

We repeated this interaction with the fearsome beast every time we encountered him before our walk home. Later that day, Christopher and I were talking about the museum, the horseshoe crabs and the like, but he kept talking about the “fwid,” which, for the life of me was beyond the scope of my prodigious abilities in Toddlerese. It wasn’t until I was describing the squid incident to Chris that night that I finally was able to put together a translation.

Christopher talked constantly about the fwid over the next days and weeks. He adopted a dog toy with fuzzy stuff at the end as the official fwid and wanted to sleep with it. (We allowed it but yeah, I know, gross.) We took a day trip to NYC and went to the Museum of Natural History and made a beeline for the squid model to say hello.

I decided the dog toy could not do as a real squid, so I searched for a crochet pattern only to find that an absurd number of patterns for squids exist, which probably says something about the demographics of crochet. I needed a break from the baby blanket I’m making for Baby Girl Mooney (coming to South Bend in late November) so I whipped up a squid with the pink(!) yarn from the blanket. He took to it immediately. 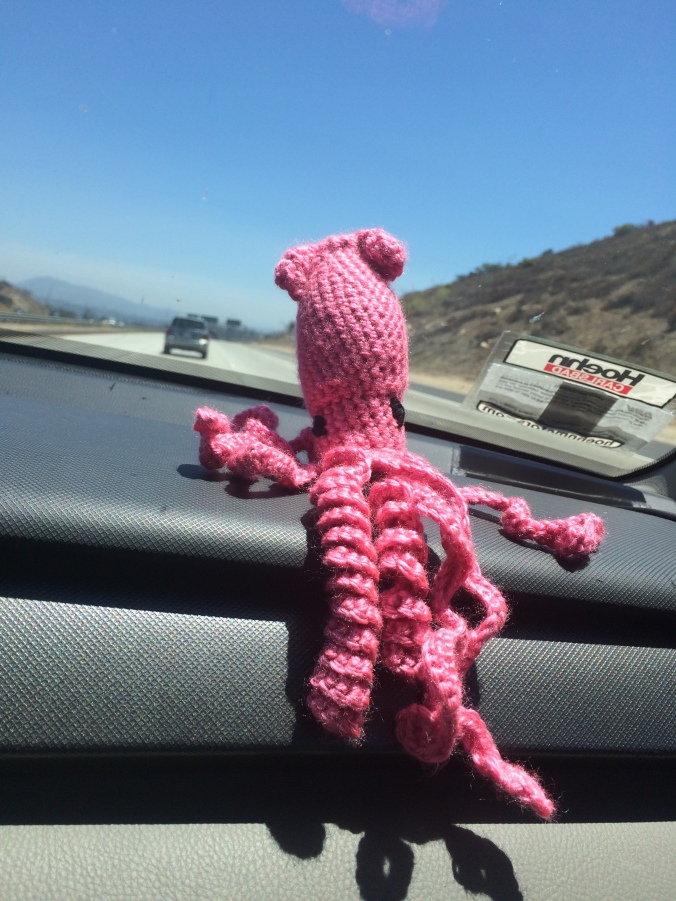 This is all to say how cool it is to watch a two-year-old cope with his fears and literally embrace the object of them in the form of a dog toy and then a small stuffed animal. It took some major adjusting to the terrific twos. I didn’t understand where all of these “no”‘s were coming from. What happened to my compliant and easily distracted baby? But with the help of some Janet Lansbury and a second trimester upswing, I’m having a lot of fun with our toddler’s blossoming personhood. Sure, he yells about eating his eggs in the morning, but he also tells protracted stories about various vehicles and gets the occasional obsession with sea creatures.

In the end, Christopher conquered the giant squid with kindness, proving we can befriend our enemies and that I should turn this story into a children’s book deal and make us a million bucks.

One thought on “Christopher vs. The Giant Squid”