Linking up with Kelly, who has had some moving posts the past week, for Seven Quick Takes!

This past week, I have leaped con todo mi corazón into the absurdly eventful world of Grand Hotel on Netflix. If you’re unfamiliar, Grand Hotel is purported to be the “Spanish Downton Abbey,” but it’s really a telenovela masquerading as a period piece. AND IT IS FANTASTIC. There are murders, gold knives, gas leaks, secret pregnancies…the works. I’ve just started season two and, so far, this screenshot pretty much sums it up: 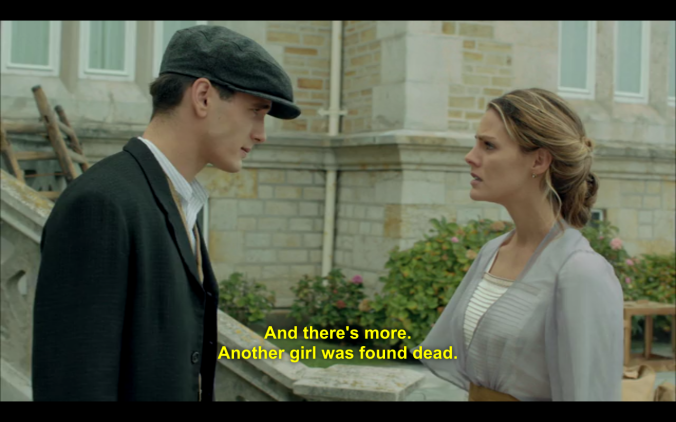 That’s it. That’s the show.

The show is also reminding me how much I hate the Spanish subjunctive, but love the yo form of suponer. Supongo. 101 Dalmatians is essential to the integrity of the Spanish language. The hair on this show is varied and indicative of most of the characters’ virtue. I have copious examples:

Julio: apparently Blancarò is Spanish for Brooklyn, because his haircut is straight out of Bushwick.

Belén, or Ms. Bangs of Deception. It was quite obvious that Diego was evil from his very first scene because all of his hair, both head and facial, is the same length. Classic Crafty Guy hairstyle.

This dude used the same setting on his clippers for his whole head.

Alicia’s got Disney princess hair and the eyes to go with it. At midnight, Julio turns back into a pumpkin.

And don Javier has the floppy hair and trout mouth of a ne’er-do-well. 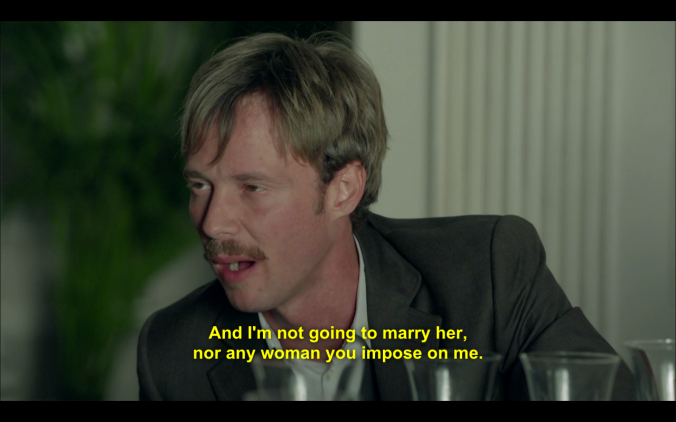 I may have gotten a little discouraged when I realized there are SIXTY-SIX episodes of this, but by discouraged, I mean excited.

In order to resist turning into a couch patata by means of el Gran Hotel, I’ve been attempting to capitalize on our new dog walking regiment and turn it into a new enthusiasm for exercise. I’m borrowing a friend’s Fitbit Flex to try it out and those seemingly sentient little LED lights are exactly the nonjudgmental cheerleaders I need to get 10,000 steps per day. Hey Pixar, get on that movie about the activity tracker with a heart of gold. It’s been easier than I thought, especially since we currently don’t have a car and I figured out how to get the Flex to count my extensive stroller pushing by hooking it to my pants or bra instead of leaving it on my wrist. I’ve been trolling eBay to get one for myself, but if anyone has one they want to get rid of, holler at me.

Until I figure out a Grand Hotel-inspired workout (every time Julio and Alicia furrow their brows at each other, do twenty pushups?), the theme days per Huset Fitness and the Facebook group is super fun too. I’m feeling better than I have in a while and doing a YouTube workout or whatever during nap time has been more refreshing than I expected.

My sweet Christopher is 16 months old this week. He suddenly seems so very tall, but he’s still such a baby. He’s getting more independent and spends more time playing with his trains by himself for extended periods, but still can’t quite muster the fine motor skills to attach Duplos together, a deficit that causes him much frustration. It’s sort of funny to see him stymied by the limits of his chubby fingers. Here is a repost from Instagram:

Christopher is down to nursing only before bed and when he wakes up in the mornings, a situation I am more than happy with. His bedtime routine includes a big bottle – named The Great Bottle or the GB – and then nursing to sleep. But before nursing is the nursing song. It’s called “Nursing Time” and it features original lyrics set to the tune of “Closing Time.” It is entirely ridiculous and perhaps my favorite part of bedtime besides the actual going to sleep part. Chris and I have really perfected the harmony, too. “One last call for milk and all, so finish your bottle, my dear.”

A coupla good reads this week:

–As Pale as Snow: The Publicly Private Faith of Comedian Jim Gaffigan at Christ and Pop Culture // Love this article about Jim Gaffigan.

–Searching For a Candidate That Doesn’t Exist by Gracy Olmstead // I have zero interest in the candidates for president this year. It seems like meaningless pageantry. I mean, Trump? Seriously? “And perhaps, if the Republicans take another hard hit in 2016 amongst millennial voters, they’ll finally learn what they should have learned in 2012: you can’t win over young Americans with fancy websites, Twitter accounts, and hashtag campaigns. Unless you offer something meaningful, thoughtful reform, we’re going to look elsewhere.”

The YouTube genre of Dads Dancing with their embarrassed children is my new fave. Here are two.

And, icymi, my last two posts on this ol’ blog:

“The greatness of God lives at the level of ordinary things.” – St. Josemaria Escriva

Have a great weekend!

3 thoughts on “7QT: In search of a Grand Hotel workout.”